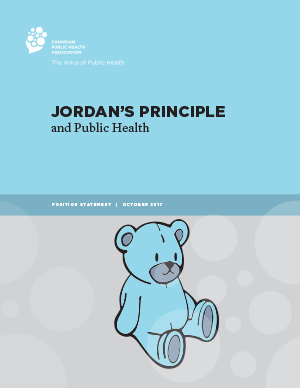 The Canadian Public Health Association supports Jordan’s Principle, and calls on the federal, provincial and territorial governments to fully implement the Principle and address inter-jurisdictional disputes related to the provision of health and social services and/or supports to First Nations’ children.

Jordan’s Principle is an approach to resolving disputes related to the provision of public services (including health) to all First Nations children living on- or off-reserve. The principle provides a child-first approach to meeting the needs of First Nations children in a culturally appropriate and efficient way (within 48 hours); it requires that the government of initial contact with a child fund the health care and social services needs without delay or disruption of services. Any funding disputes among government organizations are to be resolved later through a jurisdictional dispute resolution mechanism. The principle components include:

The underlying situation that gave rise to this principle was unsupportable from both health equity and social justice perspectives, and represents an example of structural violence, whereby disagreements over jurisdictional responsibility led to harm to a child.

Jordan River Anderson was an Indigenous boy from the Norway House Cree Nation, born in Winnipeg with a rare disorder that required hospitalization from birth. Doctors eventually believed that he could leave hospital to go live in a foster care home with specialized medical equipment and services close to the hospital in Winnipeg.1 Government agencies, however, spent over two years in disputes over who had financial responsibility for home care. These services would ordinarily have been available for any other children in Canada without dispute.2 The cause of these disputes was the complex array of federal, provincial and territorial financial responsibilities affecting health care services delivery for First Nations. In 2005, Jordan passed away in hospital at age five. First Nations advocates developed and supported implementation of Jordan’s principle, and subsequently received unanimous endorsement by the House of Commons in 2007.3 Despite this endorsement, a persistent lack of adherence to Jordan’s Principle led to it being included as the third of 94 “Calls to Action” by the Truth and Reconciliation Commission in 2015.4 Jordan’s Principle was also at the core of a January 2016 Canadian Human Rights Tribunal (CHRT) ruling in which the Tribunal called on the Government of Canada to “cease the discriminatory practice and take measures to redress and prevent it.”5 In May 2017, the continuing lack of compliance led the CHRT to issue a third non-compliance order noting that the Government of Canada’s “definition and implementation of Jordan’s Principle to be narrow and inadequate, resulting in service gaps, delays and denials for First Nations children.”6

1 The fact that Jordan could only receive these services after being put into the child welfare system, rather than going home, is an additional injustice about his story. Thus, Jordan’s Principle is also about ensuring First Nations children and youth have access to the services they need at home.