Media reports concerning trends in playground injuries are often muddled by the use of outdated statistics and unequal comparators. For example, a 2013 news report stated that 28,000 children per year were injured on Canadian playgrounds and that between 2007 and 2012 the number of injuries had increased by 8%.1 Alternatively, a related news article reported 3,960 playground-related injuries from four general hospitals and 11 pediatric hospitals across Canada in 2008 with 1,918 children under the age of 20 admitted to hospital.2 These conflicting reports contribute to the confusion around playground safety. These two examples demonstrate that crude numbers of playground injuries should be interpreted with caution.3 Approximately 5% of children seen in emergency departments are admitted to hospital while the rest are treated for minor injuries and discharged.

The most recent data available, presented by the Canadian Institute of Health Information (2016), indicates that 1,841 children in Canada in 2014-15 under the age of 18 required hospitalization as a result of a playground injury.4 Falls were the leading cause of children’s injury hospitalizations (44% of all admissions) and 7% of these injuries occurred on playgrounds.5 An analysis of playground falls between 1994 and 2003 estimated that each year 2,500 children below 14 years of age were hospitalized for serious injuries.5 Of this total, 81% had suffered a fracture while 14% were admitted for a head injury and 5% suffered from other types of injuries including dislocations and open wounds.6 Comparatively, in a three year period from 2007-2010, 56,691 Canadians under the age of 19 were evaluated in emergency departments for sports-related injuries.7 Of the sports included in this analysis (soccer, cycling, hockey, football, basketball, snowboarding, baseball, volleyball, rugby, lacrosse, ringette, and sledding), soccer accounted for the highest number of injuries (11,941 with 30% being fractures) and ice hockey accounted for the highest number of concussions (1,023).7 A major limitation of interpreting these statistics is comparing the number of children using playgrounds compared to enrollment in organized sport (the denominator), as well as the lack of exposure data (i.e., environmental factors or potential causes in relationship to the outcome (injury) of interest).

In the United States there were an estimated 238,121 playground equipment injuries in 2014.8 During the 10 year period from 1996-2005 there were 2,136,800 playground equipment injuries resulting in emergency department visits for children under 18 years of age, an average of 213,700 per year.9 This 2009 investigation reported a rate of 266 injuries per 100,000 children and no significant change in injuries over these 10 years.8 Falling from playground equipment was the most common cause of injury and accounted for three quarters of all injuries.8 Fractures were the most common playground injury (35%) followed by contusions/abrasions (20%) and lacerations (20%). Approximately, 45% of all injuries were to the upper extremities and 15% affected the head.8

Studies demonstrate that falls exceeding 1.5-2m in height increase the likelihood of incurring an injury. For example, a study of Montreal playgrounds found that injuries were more than twice as likely on equipment exceeding two metres in height.10 Another Canadian study compared the incidence of severe (mainly fractures) and minor (mainly lacerations) injuries and found that falls of greater than 1.5m resulted in twice as many severe injuries as minor injuries,11 while a different study found that the height of falls was correlated to the number of fractures.12 A study conducted with an Asian population reported that children with a body mass index (BMI) lighter than 19.8kg/m2 were over two times less likely to encounter a major fracture (required reduction or operative fixation) when falling from heights on a playground.13 Other playground characteristics, including the fall height, were not associated with the severity of the injury.

The material of surfaces can positively or negatively influence children’s experience of injury as certain types of surfaces can reduce the risk of injury in comparison to others. One study showed that the odds of being injured in falls on non-impact absorbing surfaces were 2.28 times that of falls onto impact absorbing surfaces.12 This study also showed that children experienced half the risk of injury on rubber surfaces compared to bark surfaces and a fifth of that on concrete surfaces. However, this study is limited by the very low number of cases (<5) on each surface, with the exception of bark. Results from a study that used computer-simulated energy flow to analyse hand impact on playground surfaces within the wrist conflicted with this finding. Energy returned to the body on rebound and during impact may be predictors of injury outcome and risk fracture. At a height of 1.5m, more energy from falls was absorbed by the wrist during impact and rebound on rubber surfaces than on bark surfacing.14 Other empirical evidence has shown that falls on a wood fibre playground surface were far more likely to result in an arm fracture than falls on a sand surface.15 No serious head injuries were observed in this study which included 37 elementary schools and a total of over 15,000 students in Toronto. Furthermore, one study found that the risk of severe injuries was more than double on playgrounds using non-recommended surfaces.10

The majority of injuries seen in emergency departments are the result of fractures and dislocations, which occur from falls on climbers, monkey bars, and slides. Softer playground surfaces, such as sand, pea gravel, wood/bark chips, and rubber, have the potential to lower the risk of injuries from falls,12 however some argue that given the rarity of serious playground injuries16 they may not be cost effective.17

In the US, emergency rooms (ERs) treat an average of 21,000 playground-related head injuries per year for children aged 14 or younger.18 This report also indicated that ERs treated 29,000 children for serious head injuries in 2013, an increase from 18,000 in 2001. This increase, which began in 2009, seems to be at odds with the notion that playgrounds are becoming safer, due to the implementation of The US Consumer Product Safety Commission (CPSC) guidelines for softer surfaces and limiting height on play structures.19 Availability of more specific discharge data from emergency departments, and increased concerns around head injuries may be contributing factors to this increase.20 Importantly, the vast majority of these injuries were minor: only 2.6% of children visiting ERs were admitted to the hospital, a rate of 0.9 children per 100,000 per year.21 This equates to one emergency department visit from a playground-related traumatic brain injury (TBI) for a school of 500 students every 5-6 years.20

Deaths occurring on playgrounds are extremely rare and are usually caused by strangulation due to head entrapment or when an item of clothing is caught on equipment.6 In the United Kingdom, there are 500 to 600 fatalities from accidental causes per year; however from 1981 to 1999 there were only five or six fatalities attributed to playground equipment which equates to a rate of one death every three or four years.22 In comparison, data from the US shows there are approximately 17 deaths per year attributable to playground equipment, 67% of which occur on home playgrounds.23 This rate accounts for a fraction of the annual death toll from accidents in children below 14 years of age, which is reported as between 8,000 and 10,000.24

Playground injury prevention initiatives focusing on making playgrounds safe began in the 1970’s. Since then, safety standards have been implemented in Britain, Europe, Australia, and the US. These standards include the use of impact absorbing surfaces, changes in equipment, entrapment avoidance, height restrictions, guardrails, and changes in materials used in equipment construction.25 Literal interpretations of these guidelines are often used as fuel for litigation, and strict adherence to them may reduce liability concerns while disregarding children’s needs for unstructured child-led play.12 This perspective may be seen as being in opposition to current initiatives aimed to make playgrounds interesting, challenging and encouraging outdoor play.

The Canadian Standards Association (CSA) first developed guidelines for public playgrounds in 1990 that included recommendations on the design, installation, and maintenance of playground equipment.26 Impact absorbing surfaces (IAS) such as sand, pea gravel, wood/bark chips, and rubber were recommended, but depths of material recommendations were absent. Furthermore, there were no recommended fall height restrictions for playground equipment. A 2007 revision of the guidelines addressed these restrictions but it is not applicable to equipment installed before their publication.27 A large-scale intervention study conducted on Toronto playgrounds found that removing hazards and unsafe equipment to comply with CSA standards effectively reduced the number of playground injuries.28 However, this study reported overlapping confidence intervals which suggests that the change in injury rates may not be significant. Further research on this matter is needed.

Despite consistent efforts to make playgrounds safer, injury surveillance data have shown no significant trends in injuries over time.29 There is consistent evidence showing that falls from heights result in an increased risk of injury and that a maximum height of 1.5m would yield the greatest benefit for reducing injuries. There is some research which shows that IAS such as sand, pea gravel, and rubber reduce the overall risk of injury compared to concrete or grass. However, there is a lack of research regarding surfacing during colder seasons or other weather-related considerations. The supporting evidence is mixed and their potential to prevent serious injuries may be limited. Risk factors for playground accidents include heights, surfacing, and children’s behaviours and body orientation while falling, which can have little to do with the fixed equipment.24 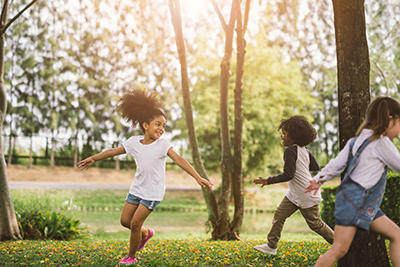