Epidemic tuberculosis (TB) came to Canada with European settlers in the 1700s. Aboriginal people in southeast Canada were probably first exposed to TB over 300 years ago, while those on the west coast were exposed about 200 years ago. 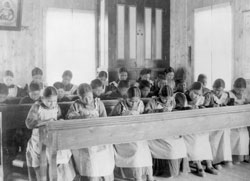 TB was spread to First Nations and Métis on the Prairies about 130 years ago when the Canadian Pacific Railway was built and the reserve system established. The Déné and the Inuit in the north were exposed more recently, in the late 19th and early 20thcenturies.

Malnutrition increased the risk of disease, and the confinement of First Nations people on crowded reserves allowed the disease to spread rapidly. Death rates in the 1930s and 1940s were in excess of 700 deaths per 100,000 persons, among the highest ever reported in a human population.

Tragically, TB death rates among children in residential schools were even worse -- as high as 8,000 deaths per 100,000 children.

When tuberculosis epidemics spread among northern Inuit communities in the 1950s and 1960s, thousands were transported to southern hospitals and sanatoria for treatment. (The 2008 Academy Award-nominated Canadian movie, "The Necessities of Life" tells one such story.) 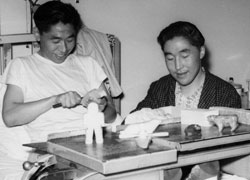 At least one-third of Inuit were infected with TB in the 1950s. From 1950 to 1969, a specially-designed coast guard ship named the C. D. Howe made summer trips to Inuit communities in the eastern Arctic.  Once the doctors decided who needed to go south for treatment in hospitals and sanatoria, these patients were not permitted to go ashore to collect belongings or say goodbye to family and friends. Some were never seen again.

In 1956, one-seventh of the entire Inuit population was being treated in southern Canada. The average length of stay was two-and-a-half years and some patients stayed much longer.

Many families were not notified when a TB patient died in the south. The dead were buried in paupers' graves in a southern cemetery, paid for by the Department of Northern Affairs.

While TB rates across Canada fell dramatically in the 1950s and 1960s due to the introduction of strong antibiotic treatment, the disease nevertheless persists in many Aboriginal communities today.

The TB rate among Aboriginal people was almost six times greater than the overall Canadian rate in 2008 and in Nunavut, it was more than 38 times the national rate (184.4 cases per 100,000 population).

Overcrowded housing increases the likelihood that infectious cases will spread TB to others. Moreover, HIV, diabetes, substance abuse, and other factors that weaken the immune system can increase the risk of TB disease after infection.

To achieve a significant decrease in the TB rate among Aboriginal peoples, improvements are needed in socio-economic conditions, the early detection of cases, appropriate and complete treatment, and available resources.