The story of polio

Polio crippled tens of thousands of Canadians until the Salk vaccine was introduced in 1955.

Polio (poliomyelitis) is an infectious disease caused by a virus. Polio can strike people at any age but children under age five are most at risk. 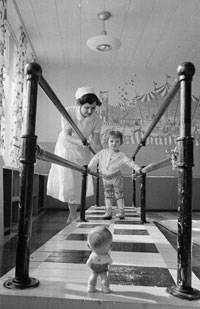 Mrs. E. Marr, physiotherapist, with Gifford, 2½ yrs. old, at the walking bars in the polio clinic at the Sudbury General Hospital [Mar 1953]

Polio used to be called "infantile paralysis" or "the crippler" because the virus can permanently damage the nerve cells that control the muscles.

Although the first polio outbreaks appeared in Europe in the early 1800s, the first known outbreak in Canada occurred in 1910. A little girl was taken to a Hamilton, Ontario hospital with what was thought to be rabies. She died, and it was later discovered to be polio.

At that time, no one knew if the disease was contagious or what could be done to prevent or treat it. Polio epidemics continued, usually in the summer or fall, and became more severe and affected older children and youth.

Provincial public health departments tried to quarantine the sick, closed schools, and restricted children from travelling or going to movie theatres. Over time, it became clear that these measures did not prevent polio's spread.

Most provinces also provided a free "convalescent" serum when people became ill from polio. The serum was made from blood donated by those who had survived a polio attack, although there was never proof of the serum's effectiveness.

In 1930, Canada's first "iron lung" was brought to The Hospital for Sick Children in Toronto from Boston. These huge metal cylinders regulate the breathing of people whose polio attacked their respiratory muscles. There was a rush to assemble more iron lungs to help keep people alive after a severe outbreak in 1937. The Ontario government paid to have 27 of these devices assembled in a six-week period.

Some women gave birth while confined in an iron lung and the Royal Canadian Air Force made emergency deliveries of these devices across the country. Iron lungs are still used in some countries. 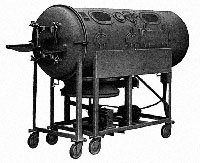 A nasal spray designed to block the polio virus from entering the body was used on 5,000 Toronto children in 1937. After two rounds of treatments, the spray was abandoned because it did not prevent polio and actually caused a number of the children to lose their sense of smell. 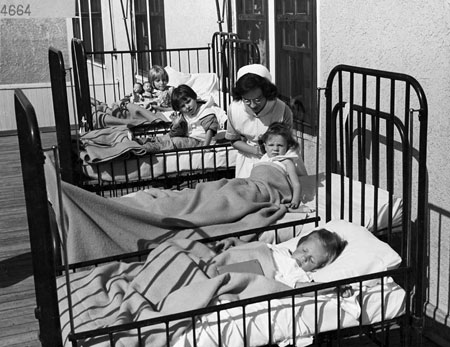 A nurse is with young polio patients at the University Hospital in Edmonton, AB. [Sept 1947]

Sadly, some people who recovered from paralytic polio in the past may later experience post-polio syndrome (PPS). This nervous system disorder can appear 15 to 40 years after the original illness, bringing progressive muscle weakness, severe fatigue, and muscle and joint pain.

There is still no cure for polio but the global eradication of the disease is hoped for in the near future--another great public health achievement.