The story of milk 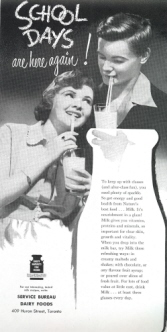 The availability of safe, nutritious cow's milk is something that many Canadians take for granted. But ensuring a safe, uncontaminated milk supply was a major challenge a hundred years ago and the story of milk is a great achievement in the development of Canada's public health system.

Humans have been drinking milk from animals, such as sheep, goats and cows, for thousands of years. From the time these animals were domesticated, their milk has been valued as a nutritious food source. European dairy cows were brought to North America over 400 years ago.

French scientist Louis Pasteur is credited with revolutionizing the safety, storage and distribution of milk, but it took many years of fighting for public health regulations and inspections before a safe milk supply was secured in Canada.

Dr. Pasteur developed the process called pasteurization in 1862, which kills microbes or microorganisms (germs) with heat, including the Salmonella typhi bacteria that causes typhoid. Raw, unpasteurized milk can also spread other types of salmonella, E. coli, Listeriosis and tuberculosis. Bovine tuberculosis infects cows and can be spread to people by contaminated milk. Typhoid and tuberculosis once caused thousands of deaths and disabilities, but neither are serious health threats in Canada today.

In 1927, a typhoid epidemic from contaminated milk affected more than 5,000 people and caused 533 deaths in Montreal, despite a milk pasteurization city by-law. The law was not enforced and as with other typhoid outbreaks linked to contaminated milk, provincial health departments across the country were powerless to enforce standards.

Dr. John W.S. McCullough, Ontario's Chief Health Officer and a charter member of the Canadian Public Health Association, told the Dominion Council on Health in 1928, "we have to go to the municipality and make a fight over [milk contamination], and it is often a long struggle before we can get a pasteurization bill carried. If we had the same control over milk by the Department of Health as we have over public water supplies, we would make a big step in advance."

In the 1920s and early 1930s, there was a wide variation in laws that regulated safe water, sewage management and pasteurization, as well as in how these laws were enforced. There were problems in many of Canada's larger cities, while the situation was generally much worse in smaller communities.

The educational reformer Adelaide Hoodless, who founded the Federated Women's Institutes of Canada, started her campaign for the pasteurization of milk after her infant son died in 1889 from drinking impure milk.

The Canadian Public Health Association and the Canadian Medical Association pressed for compulsory pasteurization of milk and in 1938, the Ontario government became the largest political area in the world to do so. Concerns about food safety grew as bacterial food poisoning incidents in Canada increased during the World War II years, prompting greater attention to food handling safety and restaurant inspections.

In addition to the risks associated with contamination, there was a growing recognition of the important nutritional value of milk and dairy products.

Nutrition surveys revealed widespread calcium deficiencies in Canada in the 1930s and 1940s. Children in lower income families were getting only half the calcium they needed for healthy growth, and their diets were lacking in milk and cheese due to economic hardship or a lack of appreciation for their nutritional value.

Milk and dairy products were part of a coordinated government action to improve Canadian nutrition, including the establishment in 1941 of a Division of Nutrition within the Department of Pensions and National Health. In the face of war-time food shortages, the Division of Nutrition launched a comprehensive national publicity campaign "to awaken Canadians to the need for adequate nutrition for the maintenance of health and physical efficiency."

Today, pasteurized milk is fortified with vitamin D to aid in calcium absorption, among other benefits. Lower fat milk is also fortified with vitamin A. The processing of milk now takes less than one day from beginning to end. At the dairy farm, cows are milked two or three times a day by machine and the milk goes directly into a large refrigerated holding tank. Approximately every other day, a special refrigerated truck arrives at the farm to collect the milk and the milk is tested for quality before being taken directly to the dairy, where it is processed into milk, cream and other milk products.

The story of milk is fundamental to Canada's safer and healthier foods--a great public health achievement.