Skip to main content
Sewage and sanitary reformers vs. night filth and disease

Sewage and sanitary reformers vs. night filth and disease

In Canada in the 1800s, cholera, diphtheria and typhoid fever were common because drinking water was often contaminated with human and animal waste.

In the 1870s, "sanitary reformers" began a long fight to improve public health by managing and treating waste and sewage. Progress was slow and sewage problems were dealt with on a case-by-case basis.

At the time, the most common way to manage human waste was to bury it or to pile it in backyards. Outhouses or "privies" were often located close to rivers, wells and streams.

In 1882, Ontario became the first province to establish a board of health to try to manage sewage more broadly, and other provinces soon followed suit. The provincial boards of health spent a lot of time trying to persuade local councils to deal with their expanding sewage problems and to prevent the contamination of drinking water. 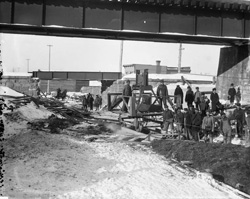 Cities in North America first began building sewers in the late 1800s. Sewers were designed to deposit raw sewage directly into the nearest body of water. Untreated waste washed up on beaches and contaminated the lakes and bays where drinking water was drawn from.  Water pollution was not well understood and rarely even considered at that time.

Gradually, provincial public health laws were amended to cover the pollution of lakes, rivers, streams and waterways. By the end of the First World War, however, the number of municipalities that treated their sewage was still only about one in three.

Eventually, the need to treat raw sewage was recognized but municipalities and provinces frequently clashed over waste management. A number of municipalities began building sewage treatment plants in the 1960s but many cities and towns were reluctant to shoulder the costs. 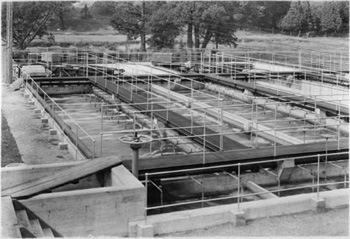 Today, some Canadian cities have top-notch sewage treatment facilities, while others have none.  Over 90 Canadian municipalities still discharge raw, untreated sewage, including the provincial capitals of British Columbia, Nova Scotia, and Newfoundland and Labrador.

In February 2009, the provinces and territories signed an agreement with the federal government to upgrade Canada's 3,500 sewage treatment plants and remove solid waste and most toxins. These national regulations will be implemented over the next 30 years.