The scoop on poop 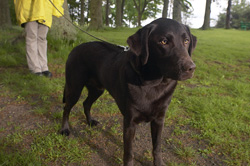 Over the last 140 years, Canada's public health leaders have been fighting for better management and treatment of human and animal waste.

Although typhoid fever, diphtheria and cholera are no longer common here, human and animal waste still transmits disease and pollutes our environment.

When untreated waste (in other words, "poop") ends up in rivers, streams and lakes, bacteria can pollute beaches and threaten plants, fish, wildlife and people.

Who Does What Where?

In Canada, the wildlife commonly associated with the contamination of drinking water includes deer, beavers, muskrats, rodents, gulls, and geese.

The biggest source of animal waste is farm animals but in cities and towns, dogs and cats are major contributors.

Why You Need to Scoop the Poop

Everyone knows that sidewalks and parks littered with dog poop are gross. But it goes beyond simply being smelly and disgusting.

Pet poop that is left in yards, fields, parks and on sidewalks eventually ends up in rivers, lakes and other bodies of water. It is carried there by spring run-off and heavy rainfalls, either directly or via storm sewers.

When storm sewers, spring run-off and rainstorms wash dog waste into waterways, the bacteria count rises. Dog waste is also high in nitrogen and phosphorus, which promote weed and algae growth in lakes, ponds, and streams. This limits the sunlight available to aquatic plants, which in turn reduces the oxygen in the water that is needed by fish and other organisms.

Recent studies in the United States traced 20% to 30% of the bacteria in water samples from urban watersheds to dog waste. The viruses, bacteria and parasites found in dog poop can cause disease. Children and other dogs are particularly susceptible to the diseases transmitted by dog poop. (Cat poop is usually less obvious but it causes the same problems as dog poop.) 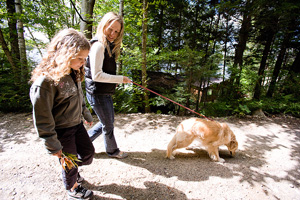 The first part of the solution is simple: pick up after your dog and cat!

What you do after you scoop the poop is a bit more complicated. Most cities and towns have stoop and scoop bylaws but the rules vary. Some municipalities want owners to flush it down the toilet, while others say put in it the trash. Some want it wrapped in absorbent paper, while others want it double-bagged.

There are also a variety of commercial dog poop solutions, including backyard composters and digesters. Compost from dog and cat waste should not be used on vegetable gardens.

A Sampling of Solutions 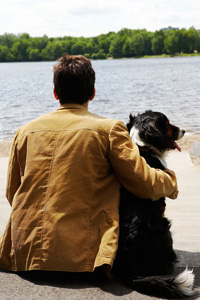