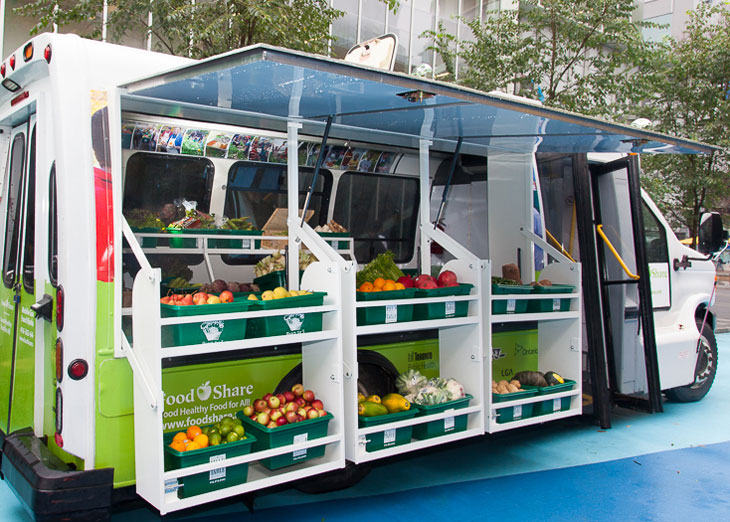 It's a familiar sight nowadays: a truck loaded with a variety of cooked food, hawking its wares around Toronto. One food truck, however, is completely different. Instead of offering the usual fare, the Toronto FoodShare Truck is a veritable farmer's market laden with fresh fruits and vegetables available for reasonable prices.

A troubling pattern emerged. The Team saw links between poor nutrition, obesity and chronic disease among the city's poorest neighbourhoods and the proximity of these neighbourhoods to grocery stores and other places to buy nutritious food. "We first did the mapping around those areas of the city where people had to travel more than 1.5 km to the nearest supermarket overlaid with income and poor transit access," says Barbara Emanuel, Manager of the Toronto Food Strategy. "Needless to say, many areas of the city with populations with low income had the least access to both public transit and to supermarkets."

Coming up with an innovative solution

In order to promote access to good food, TPH decided to explore a mobile solution for those areas where people have poor access. The Food Strategy team, with United Way Toronto, FoodShare Toronto, and the University of Toronto developed the working idea of mobile produce stores that would operate from a FoodShare truck. The short-term goal was to improve nutrition, while the long term-goals were to reduce obesity, chronic diseases, and enhance social cohesion in the areas with the most impoverished populations of the city.

Some meals on wheels!

The current FoodShare vehicle is a donated Wheel-Trans bus from the Toronto Transit Commission (TTC). TPH, with the help of an architecture firm, has refurbished the vehicle, decorated the outside, ripped out the seats, put in permanent shelves, and created a mobile store.

Dedicated teams of volunteers, called "Community Food Leaders," give their time and energy to do community outreach, set up the bus, and help with operations. Neighborhood residents can socialize while they wait for their turn to peruse the selection of produce. Shoppers are often pleased to see high quality ethnically diverse options -- the kind of produce they are used to and can easily cook.

Even great work has its challenges

There have been plenty of hurdles for the program. City regulations surrounding parking and permits for food trucks are very restrictive. There are few places where the truck is allowed to go. Licensing for food vendors is expensive and non-transferable, which adds to the limitations. A pilot project was developed to assess the feasibility of such an initiative and address potential hurdles. While many of the regulations were waived for this particular pilot, they may be reapplied if the project moves past the pilot stage and enters a long-term period of operations.

The TTC bus has been a great asset for the program although it is too small to accommodate many buyers in the winter months.

Affordability is still an issue. The project team has worked to make sure the price of food is reasonable but the cost is still prohibitive for a few of the poorest residents. "We still haven't addressed the affordability issue," says Emanuel. "The prices are good but if you have no money... it doesn't matter how much it costs if you can't afford it." Furthermore, the project may not be economically viable as the team continues to struggle to secure long-term financing. The price of the food they sell is too low to completely finance the operation.

What the future holds

Emanuel remains positive about the future of this initiative. "When we bring the community food leaders together and we hear about their passion and energy and excitement about the project, it's completely wonderful. However we still haven't figured out a sustainable business model, as we are serving the lowest income communities in the city. But the excitement of people coming out of their apartments to the most diverse store in Toronto...and seeing produce that is familiar to their diet...", makes it all worth it.