1916 - Manitoba was the first province to pass a Mothers' Pension Act to provide a small income to widows and divorced or deserted wives with children to support. Called "public assistance," the help was based on a means test.

1941 - The Unemployment Insurance Act came into effect, intended to temporarily help people who were between jobs.

1944 - The Family allowance began, which was Canada's first universal welfare program. Generally referred to as the "baby bonus," it was a monthly payment to Canadian families with children, regardless of income.

1952 - The Old Age Security Act came into force as one of the cornerstones of Canada's retirement income system.

1957 - The National Hospital Insurance and Diagnostics Act was passed, which was a cost-shared program providing free acute hospital care and laboratory and radiological diagnostic services to Canadians.

1966 - The Canada Pension Plan (CPP) came into force, a contributory plan that supplements the Old Age Security plan on the basis of lifetime individual payments into the plan.

1971 - The Canada Labour Code was amended to implement a paid maternity-leave policy.

1979 - The Canadian Task Force on Preventive Health Care recommended that the undefined annual check-up be abandoned and replaced with a series of age-specific periodic health assessments for all persons living in Canada.

1984 - The Canada Health Act was passed by Parliament, updating the earlier hospital and medical care insurance acts, and outlining the five principles of a public health system - universality, portability, comprehensiveness, accessibility and public administration - that provinces and territories must meet to receive the full federal cash transfers for health and social programs.

1989 - The end of universality began when a special tax was introduced on Old Age Security and Family Allowance benefits which became known as the 'clawback.' 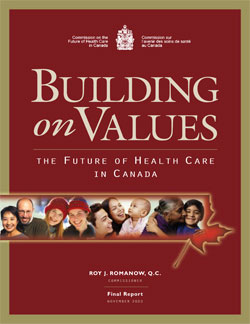 2003 - The Prime Minister and Premiers of seven provinces signed the First Ministers' Accord on Health Care Renewal agreement outlining the direction of public healthcare in Canada in the near future. Key issues were prescription drug coverage, home care, diagnostic services, timeliness of care and primary healthcare reform. A Health Council was established to monitor and make annual public reports on the implementation of the Accord.

2004 - The Prime Minister announced $41 billion over 10 years of new federal funding in support of the action plan on health.