Skip to main content
Fighting the good fight: taking on the anti-vaccine movement and public apathy

Fighting the good fight: taking on the anti-vaccine movement and public apathy

A nurse is about to inject a needle into a baby with the mother smiling and holding the baby. Possibly taken at the Hospital for Sick Children. Toronto, Ontario. c 1946.

Immunization is among the most successful, equitable and cost-effective public health interventions. Vaccinations protect us from specific diseases that can make us very sick or even kill us. They do this by boosting our body's own defense system. The vaccines used in Canada are highly effective and extremely safe. In fact, vaccines are among the safest tools of modern medicine and serious side effects are rare.

There have been anti-vaccine campaigns since vaccination began in the late 18th century. This is a public health concern because when public confidence in the effectiveness and safety of a vaccine becomes widespread, the result can be severe. Diseases can quickly return when fewer people are immunized.

Some people oppose vaccination for religious reasons. Others say the safety and effectiveness of vaccines are misrepresented. Some are influenced by misinformation. In 1998, the British medical journal The Lancet published a study by Dr. Andrew Wakefield that linked the measles, mumps and rubella (MMR) vaccine to autism. While the study was discredited and The Lancet retracted Dr. Wakefield's paper in 2010, vaccination levels had plummeted in Britain after the article appeared and the diseases they prevented surged. 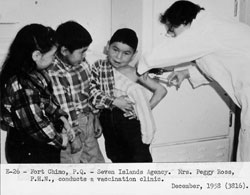 Public Health Nurse Peggy Ross is injecting an Inuit child with a needle at a vaccination clinic in Fort Chimo, Que. December 1958.
We tend to forget that it was mass vaccination that helped eradicate smallpox. In 1885, the absence of a vaccination strategy against smallpox in Montreal resulted in 19,905 cases of the disease and 3,157 deaths. In 1920, an anti-vaccination campaign in Ontario was particularly vocal and it was challenging for public health officials to convince the public to take advantage of the smallpox vaccine that was freely available and which had clearly demonstrated its protective value. The smallpox epidemic in Ontario that year resulted in 5,129 cases and 33 deaths.

Today in Canada, immunization has been so successful in eliminating diseases that many of us have become disconnected from the threat. General apathy was a major hurdle for the Public Health Agency of Canada to overcome during the H1N1 flu pandemic. Through an ambitious public awareness campaign, however, Canada achieved one of the best H1N1 immunization rates of any country.

So in 2009-2010, public health in Canada continued to fight the good fight for immunization!